Test response time, load speed and size of all elements on a web page 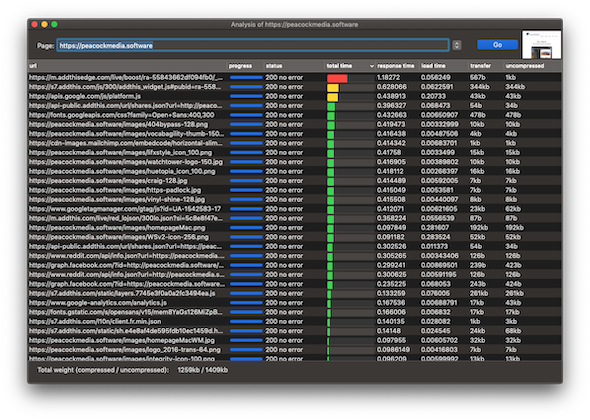 Do your pages load as quickly as they could? It could be down to a third-party plugin or code, or an unnecessarily large image. These will be easy to spot with ReActivity

Page load speed is now taken into account by Google so a slow page is bad news for your search engine optimisation (SEO) as well as your visitor experience.

For all of this with more functionality plus link checking, SEO checks, HTML validation and other advanced features, please see Scrutiny

ReActivity is the page analysis tool from Scrutiny built as a standalone app.

What should I do with the downloaded file?

Open the .dmg file and find the application inside. If you want to keep using ReActivity, drag and drop it into your Applications folder. To keep it in your dock, right-click or click-and-hold on its dock icon and choose 'Keep in dock'.

Shows uncompressed and compressed size of files where gzip is being used by the server. So webmasters can easily see the benefit of their servers' gzip service and the actual 'transferred' weight.